When the Palio of July was “a poor relative” 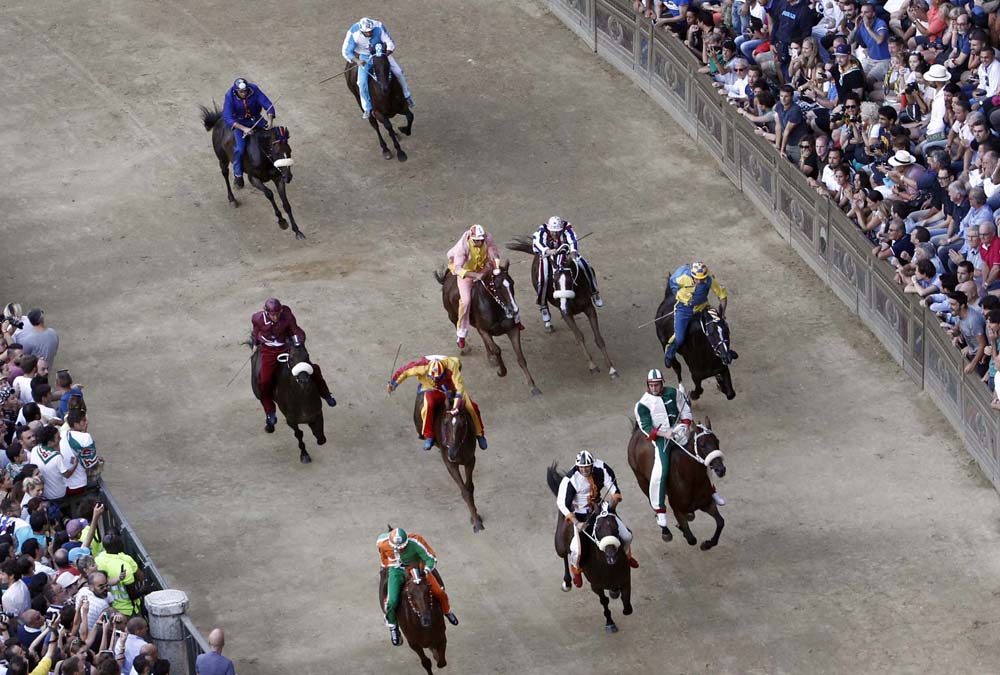 In the second half of 1800, the horserace of Provenzano lived such a deadlock regarding the aesthetic aspect, that also the passion of contradaioli decreased; which is ironic due to the birthright with respect to the August Palio. The main reason is that the Palio of August is often attended by tourists and Siena always aims to satisfy their great expectations by celebrating and organizing special events.

For this reason, some decades after the Unification of Italy, until the first half of XX Century, the August Palio was characterized by a series of touristic spin-off: all-inclusive packages (train ride, reserved place in Piazza del Campo during the race, museum tickets and opera tickets at night); weird kind of Palio such as Roman Palio, Palio in Fortezza (the main fort of the city) and, horror of horrors, two grotesque surprise Palio received with detachment by Siena people at the beginning of XX Century. Historical re-enactment and village festivals too. It is essential to highlight that this national-popular sense was not invented in Siena nor in Italy, but it was common in all the main European cities.

Anyway, by inertia, the Palio of July became a “poor relative” of the August one. This fact was not well accepted by the citizens and contradaioli who, in the pages of the famous newspaper “La Vedetta Senese”, claimed the same dignity for both races. A first result took place in 1899: tourists went to Siena not only in August but also in July and they, unfortunately, took part into a sloppy and rough edition that usually disappointed them. Where to start? By changing the parade of the “Corteo storico” (historical procession) during which just the contrade that run are allowed to participate. The famous newspaper worked as a sounding board to promote the citizens’ proposal.

The town Hall- that once was not so sensitive to the Palio-related issues- turned a blind eye; but the contrade didn’t give up and, between the 27th and the 28th of June, they decided that all the contrade would participate in the Corteo Storico on the 2nd of July. And so it was.

“La Vedetta Senese” obviously published the triumphal announcement on the 1st of July. The journey to equality had just started and would have taken a turn with the rewriting of Palio regulation thanks to Fabio Bargagli Petrucci. There were no more hierarchies: the beauty of the event was guaranteed in both the editions.

Palio matters are such complex matters. Do you want to know something more? Go reading “Il Palio di Siena. Una festa italiana” (The Palio of Siena. An Italian celebration) edited by Laterza. But, pay attention: I do not want to take all the credits, the part about the printing process was a gift by Maura Martellucci and her research.