When one is born extraordinary, then becomes ordinary. The Palio of July 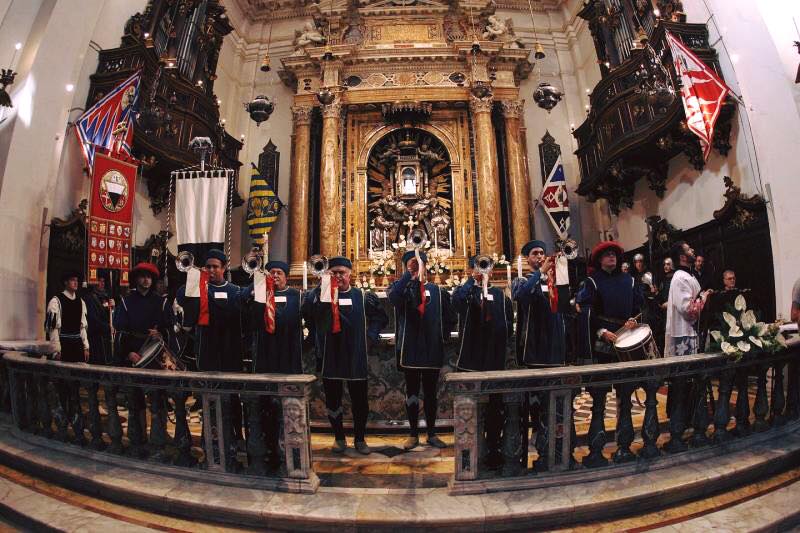 Maybe it’s because in Italy (and Siena is in Italy, remember it) there is nothing surer than the fact that something extraordinary will end being ordinary. And in this city, that happened to the Palio of July: it is the most ordinary, it’s the first, it belongs to the contrade, it was born 500 years before the Palio of August. In this regard, the history tells us that while the church of Santa Maria in Provenzano was about to be completed, there were celebrations in honor of the Holy Queen who was hit by a sacrilegious ball of an arquebus shot by a soldier. That’s why, in 1595, it was already attested a huge procession organized by the contrada of Giraffa that was imitated by almost every other contrada with their celebrations. Thus, somebody, in 1605, came up with an idea: why not organize a Palio in Piazza del Campo to celebrate the Holy Queen in a more decent way?

This idea wasn’t just a vague proposal. Fortunio Martini and Gismondo Santi- two important figures who managed the festivity of Assunta- had the course of “long Palio” (run in the city streets) calculated and then they decided to translate it in laps to run in Piazza del Campo. Their motivations are impeccable from both the economical and the aesthetic perspectives: “the long Palio” didn’t let all the people enjoy the race because you was able only to see the “mossa”, one passage or the arrival (unless someone had run faster than the horses or Supermen had already existed). Then, why should the expensive “drappo” (the award of the Palio) be given to other people? “Palio should be run by the contrade of Siena and the “drappo” should be preserved in one of the city churches”- they said.

This proposal arrived on the table of Ferdinando I’s general Secretary, but in Florence the situation was misunderstood: they thought that Siena people just wanted to introduce a new game. The Grand-Duke puffed: “Do what you prefer to do, I have more important things to think of”.

The secretary reported the Balia (Siena authorities): “It’s fine but you have to assure us that this new show is very safe because the “festivity shouldn’t end in tragedy and people don’t kill each other”.

In contrast with the common belief, the idea was well accepted but wasn’t realized immediately. It was recovered almost 30 years after. We’re in 1633 and “long Palio” had been suspended. Why? Do you know “The Betrothed”? And the threat of plague? Also in Tuscany, it caused a lot of disasters, but in Siena they were contained thanks to the cordon sanitaire decided by the councilors of the governor (or maybe it was just fortune!). Among the measures, there was even the suspension of the Palio in order to avoid the crowd that usually invaded the city from every part of Italy.

Sick of this “fasting”, the citizens remembered the old idea of Martini and Santi. “We won’t let anyone to enter the city, but we cannot resist without Palio. So, let just the contrade run the race and let’s organize it in Piazza del Campo, which is more beautiful. It was an idea that met every need and was eventually realized. On the 15th of August, the race was run by local horses combined with the contrade instead of horses with superior breeding from the rest of Italy. It was the first “Palio alla rotonda” and was won by the contrada of Tartuca. It would have taken time for this Palio to stabilize but the seed was sowed. The first ordinary Palio was born as an extraordinary event. Then the story of Palio went on. How? Read the book “Il Palio di Siena. Una festa Italiana. (“The Palio of Siena. An Italian festivity”) published by Laterza.