In Siena the first ever Jubilee in history 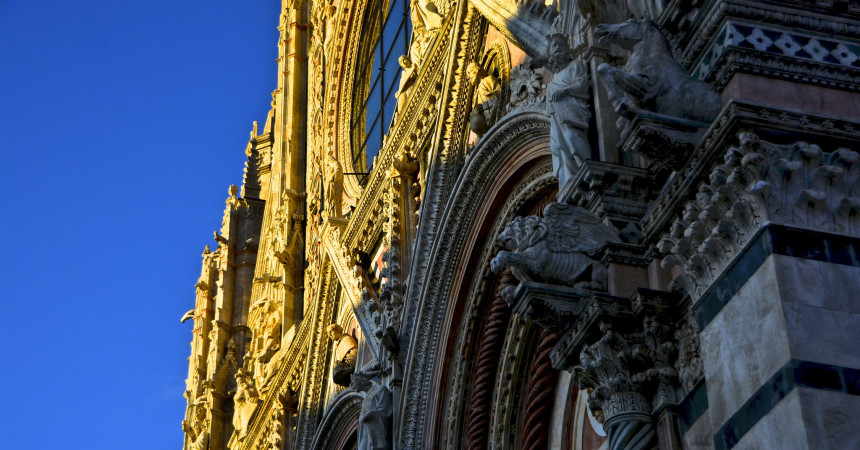 The 8th of December St Peter’s Holy Door was open by Pope Francis to launch the catholic Church’s ‘Year of Mercy’. An extreme tight security in Rome: from 50 to 100 thousands are expected in St Peter’s square and to guarantee the best security level, more than 3200 soldiers will be added to the  ordinary police forces and a no-fly zone imposed from 7 until 19. Not allowed the use of fireworks or the transport of arms, explosives and toxic gases in all Rome’s zones, included the Great Rome ring road. The jubilee, under the Isis’ threat, seems to really look for some mercy. And while Rome is facing one of the most important events in the Roman Catholic Church, we worked to enlighten your curiosity. The epigraph in Siena’s Duomo: on the marble we find the memory of the very first jubilee.
Probably very few people know the importance of the epigraph above the right door in the Duomo’s façade. It is the evidence of the first jubilee in history, the one called by Bonifacio VIII in 1300, and the proof that already in back in that time every church was opening their Holy door. This authentic epigraph is not in any Roman’s church because the four main Churches ( San Giovanni in Laterano, San Pietro in Vaticano, San Paolo, Santa Maria Maggiore) were rebuilt after the 1300.

The February 22nd  1300, with the papal bull’s ‘Antiquorum habet fida relatio’, Pope Bonifacio VIII launched the very first jubilee in the Catholic Church history.
The year 1300 ,therefore, became the first Holy year, where all the romans’ believers who had entered San Peter or San Paolo’s churches at least one a day for 30 days would have obtained the plenary indulgence. Pilgrims, instead, had to access the church for 15 days.

Less known is the Sienese’s curiosity linked with that great event. In the last two decades of the nineteenth century, the Duomo’s Opera in Siena was commissioned to Giovanni Pisano. He was supposed to realise a new cathedral’s façade, as the original nave was extended by a few meters toward the hospital of Santa Maria della Scala. An extension that sacrificed the old façade and the portico. Giovanni Pisano, appointed master builder of the Opera, worked continuously until 1276, completing three portals and the corner towers. However, that year where a ‘scandal’ of large proportions erupted in Rome. The scandal concerned a questionable management of the yard for which Giovanni is not directly charged, but his important role forced him to resign, leaving the realisation of the opera unfinished but with the outstanding portals complete. So the magnificent new façade was almost ready when the Holy Year started and, in fact, above the right portal is still present and legible the important epigraph, which is beautifully carved in the marble. This is therefore an original engraving of the year 1300, although in the truth the inscription contains no dating.

Written on three lines, the inscription contains the following latin words: ‘ANNUS CENTUS ROME SEMPER EST IUBILENUS CRIMINA LAXANTUR CUI PENITET ISTA DONANTUR HEC DECLARAVIT BONIFATIUS ET ROBORAVIT’, which means ‘the hundredth in Rome is always Jubilee, the sins are forgiven and pardoned those who repent. This is what Bonifacio declared and confirmed.

The text, therefore, confirmed the echo of the letter sent by Silvestro from Adria, a famous papal writer, who at the jubilee’s proclamation by Pope Bonifacio VIII was in charge of spreading the news, containing what can be called the ‘slogan’ of the Jubilee itself. Really simple and rhythmic verses made to illustrate to the entire Christian world the way to get the forgiveness and , at the same time, to remember the pardon granted by Pope Boniface VIII. Verses that, like a real TV commercial, became the motto of the preachers and the pilgrims.

To support this, the same verses are carved in another epigraph, found  near Roccalanza ( near Parma) in March 1834. The stone was committed by Giacomo Valenti, probably after his pilgrimage to Rome, in order to remember and pass on the memory of the Jubilee and make known in his country the opportunity get the plenary indulgence and the complete remission of sins, a privilege that would be renewed every hundred years. Valenti’s epigraph, unfortunately partially damaged, tells us: ‘ In the name of the Lord [..] call thirteenth. This work was made/ by Master Dodo / behest of Mr. Giacomo Valenti / of Casara (?) For this (?) Church, which he / memory this brief plenary indulgence / who was in Rome and which will in any next year. So every hundred years in Rome / always will be that the sins will be forgiven if they repent. This is what Bonifacio established and decreed.’
The stone seems at first to have been placed in Casara’s oratory, but building fall into wuin and the different building materials were reused in various ways. The same Jubilee stone became the cover for a well, after being divided into two parts. In 1834 the plaque was recognized for its value and carried, in pieces,in the Museum of Antiquities of Parma where it was rebuilt. Now it is kept at the Parma’s National Gallery.

There is, then, a third epigraph, of a different nature, reminiscent of the 1300’s Jubilee. It is in Florence, on a building in Via Giovanni da Verrazzano at number 4, close to Santa Croce . The stone describes the participation in the jubilee of a couple of artisans, Ugolino and his wife: merchants, probably the object of public condemnation for their business. After the trip to Rome, they put the stone, with the epigraph on, above their door to regain a reputation in Florence. The Florentine stone said: “To the memory is perpetuated / to anyone who will read this writing / posted that in the year of our Lord / Jesus Christ Almighty God gave MCCC / a special grace to Christians (…) because in that year / was granted by Pope Bonifacio a solemn / remission of all sins, / and the guilt and punishment for anyone / who went to Rome, (…) and to Ugolino / with his wife. ”
It is a really interesting inscription because it gives us an example of real people who set off in this year and the reasons they faced this journey.

Returning to Siena’s epigraph placed on the Duomo, we can now understand its precious importance because it is one of the few in Italy to preserve the memory of that extraordinary Jubilee.
It remains, however, a question: who engraved the Siena’s stone? An Attilio Bartoli Langeli’s study on the inclusion of the Fontana Maggiore of Perugia, puts back into play Giovanni Pisano, or at least someone of his school. A hypothesis, then, is not confirmed but certainly fascinating that leaves an aura of mystery even more intricate, at the start of this new Jubilee.