Fireworks in honor of the Madonna of Provenzano: the origins of the Palio of July 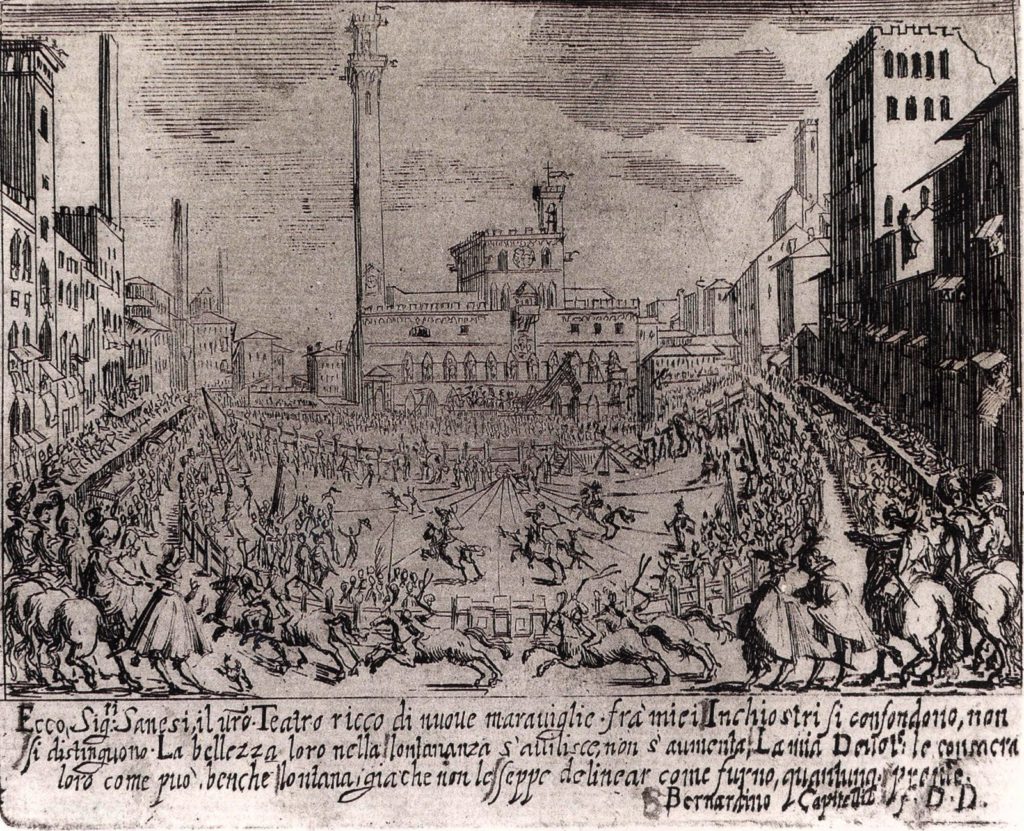 Fireworks in honor of the Madonna of Provenzano: the origins of the Palio of July.
During the 16th century, the abolition of bull races caused the Contrade- the 17th neighborhood of Siena participating the race- to use buffalos. Horses will become the real protagonists of Palio just during the following century. However, the bond between horses and Sienese people was ancient: many races were running by horses in the main streets of the city center, especially on the 15th of August in honor of the Madonna Assunta. So, after two races run with buffalos in 1631 and 1632, the governor of Siena, Mattias de’ Medici chose to make horses participate the Palio in 1633. At the beginning, the Contrade didn’t like the idea of changing the traditional bull and buffalo races. Even when the Governor announced the Palio in the occasion of his brother, the Grand Duke Ferdinando II’s birthday, few Contrade spontaneously accepted, the others were obliged to. However, something changed in 1656.
During that year, the people who usually organized the celebration for the Madonna of Provenzano on the 2nd of July- when also the visit of Mary to Elisabeth falls- came up with a genial but simple idea.
Until that year, the festivities consisted in a liturgic function in the church of Provenzano (built in honor of the small terracotta statue representing the Madonna) and in fireworks. A poor ceremony maybe. So, the organizational team decided to add a horse race to better enhance such a sincerely felt celebration. The organizational people, who had to be noble, decided to address the Contrade to animate the race and since then, they are the real protagonists of Palio.
To close the celebration, it was written a brief note that reported how the night was and where the organizational team committed to propose that race every year. “This Palio, on the 2nd of July 1656, was beautiful and cheerful. The Contrada of Torre won thanks to its jokey Simone, as known as Mone”- the noble men wrote, and they added- “The nobility of Siena is obliged to organize the Palio every year, on the 2nd of July. Immediately after the race, the winning Contrada has to go to the church of the Madonna of Provenzano to sing the hymn of gratitude”. The Palio was born.
Three years after, another important detail was described. The organizational team, called as I Signori del Brio, begged the municipality to proclaim an official announcement of the Palio. Every Contrada had to answer it in advance by communicating if they would participate the race. The expenses of July Palio were paid by the Signori of Brio until 1836 when one of them, Niccolò Bonsignori, rejected to pay his quote; then, it became the municipality the only responsible for the race.